Familiar faces, an intimate space, and blue-hued lights set the stage for an evening of connections and shared experiences at BOLD Perspectives: When Worlds Collide.

BOLD (Bulldogs of the Last Decade) alums and friends gathered at The Greene Space in New York City on February 29 and listened as some of the most unique voices from the Yale community stepped up to the microphone to tell personal tales of their experiences on campus and beyond.

Among the speakers was Robert Scaramuccia ’19, who shared a poignant story about the moments he shared with his ailing mother on commencement, and how he later came to realize how much those moments mattered to them both.

“You’re not supposed to have your mind stuck on ‘What if my mom’s medication runs out?’” said Scaramuccia, remembering his experience last May.

After sharing his story with the audience in New York, Scaramuccia knew his words resonated with many.

These moments are what make BOLD Perspectives resonant. They are part socializing, part networking, part catharsis, and always inclusive – an opportunity for recent grads to come together to share their experiences and adventures as Yalies. Co-hosted by the Yale Alumni Association and the Yale Alumni Fund, programs have included personal storytelling and musical performances, centered around a shared Yale experience.

“Everyone’s story is different,” said Jeannie Daniel, assistant director for recent graduate engagement at the YAA. “By sharing them, others can relate to similar struggles and successes.”

Such was the case with Johnathan Terry ’17, who delivered a reflective monologue revealing how the juxtaposition of his academic life and home life has empowered him to become a bridge across the intersections of many worlds. Currently working as a policy advisor for the Institute for Innovation in Prosecution in New York, he has put those words into action.

Terry’s coworker and friend Shanakay Salmon attended the event to support him, noting, “I really admire everyone’s ability to get up there and tell their story.”

The evening also included personal stories from Natalina Lopez ’16, Cody Pomeranz ’15, and Kristin Budde, who completed the Psychiatry Residency at Yale in 2018. To prepare, the storytellers worked directly with Moth six-time GrandSLAM champion Matthew Dicks in a series of virtual workshops.

Dicks doubled as the emcee for the night, urging the audience to immerse themselves fully by savoring real-life connections with those on and off the stage. He reminded the crowd that the decision to be an active part of the evening would be one they could remember forever, unlike fleeting moments spent in front of a screen.

“It was distinctly different than going to a comedy club, where everyone is trying to put on a show,” said attendee Jeremy Liu ’16, who learned of the event from a friend. “This felt a lot more personal, which I really enjoyed. It felt really meaningful.”

When asked if he would consider sharing a story at the next BOLD Perspectives, Liu laughed, adding, “It would take a lot more courage, but maybe someday.”

Michael Protacio ’14, who was also in attendance that evening, drew a parallel between BOLD Perspectives and a talk by inventor and businessman Dean Kamen that he attended earlier this year, in which Kamen encouraged attendees to “keep the family together” as they move through different stages of their lives – that is, to maintain the relationships that are important and meaningful.

“I knew I really enjoyed working with the Yale alumni community, but I never paused to think about the real-world value,” said Protacio, noting how much it meant to him to reconnect with old friends and meet new ones at BOLD Perspectives. “I think that serendipity can be intentional. By keeping the family together, especially as [you] go out into the world, you get more diverse input that can help you connect your own dots.”

BOLD Perspectives is designed to create that connection. For that reason, and the positive feedback the first series of events have generated, Daniel said she sees more BOLD Perspectives on the horizon.

“We want recent grads to know they are always part of Yale, even after they have left campus,” she said. “Events like this provide a new way for them to connect in person.” 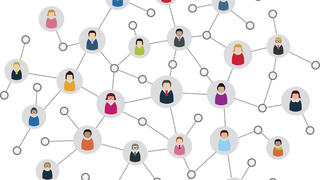