The Yale Medal is the highest honor presented by the Yale Alumni Association, awarded annually to members of the Yale family for their individual service to the university.

This year’s recipients run the gamut of the alumni experience, encompassing those who have made a difference both as leaders and as mentors, at home and abroad, and whose work has spanned from the School of Music to the School of Management and has included the YAA, the Alumni Schools Committee, Yale University Art Gallery, the Yale Alumni Fund, the Yale Board of Trustees, and more.

Since its inception, the Yale Medal has been presented to 324 individuals, all of whom showed extraordinary devotion to the ideals of Yale and demonstrated their support through extensive, exemplary service to the university and its many schools, institutes, and programs.

Please read below for more on each of the recipients and their contributions.

Better has been active in the Yale alumni community since graduation, adding fresh leadership roles over the years and excelling in all of them. Her genius lies in connecting alumni to the university, drawing talented people back into the fold and harnessing their expertise to create opportunities for growth and advancement. And her dedication to the Class of 1984 is without peer. Better was class secretary from 1999 to 2004 and has served on the reunion gift committee for each of her reunions, twice as co-chair. In addition, she is deeply engaged with Yale’s University Library Council, which she joined in 2014 and has chaired since 2017, and with the School of Music, serving on its Board of Advisors since 2013. She also has participated on the Yale Development Council dating back to its establishment in 2012, has been an Alumni Schools Committee interviewer since 1990, and served on the Yale Tomorrow Campaign Committee from 2005 through the close of the campaign. Over the past decade, she has embraced her role as parent of three Yale students, serving on the Parents Leadership Council since its formation in 2011 and as chair of the Parents Annual Fund from 2012 to 2019, setting records for fundraising and participation. Yet for all her accomplishments, Better is best known as a loyal friend and confidante, someone who works diligently to help her fellow alumni make a difference – a devoted behind-the-scenes volunteer whose impact has been felt by many for years and will continue for decades to come.

Donaldson’s contributions to Yale have spanned five decades and numerous roles. He is best known as the founding dean of the School of Management, but his influence and impact resonate far beyond that auspicious beginning. Donaldson served as the SOM dean for five years and soon thereafter transitioned to life as a volunteer, mentor, friend, benefactor, and guiding voice, inhabiting all these roles with a grace, intelligence, and humility that so many say defines him. He has given selflessly of his time to steward the school’s path, serving on the SOM Board of Advisors for more than 40 years, and as honorary chair since 2005. His generosity and drive spurred the creation of the Donaldson Fellows, SOM graduates whose personal and professional accomplishments embody the school's mission. Moreover, he has returned often to SOM to serve as a guest lecturer and speaker, a role he has reprised at alumni events as well. Outside SOM, Donaldson served on the Yale Board of Trustees from 1973 to 1975, on the Class of 1953 Council from 1990 to 1994, and on the Reunion Gift committees for his reunions in 2003 and 2013. Through it all, he has remained a trusted friend and a valued voice, a man with a strong belief in the power of the volunteer and alumni communities. Through his deeds and his words, Donaldson has transformed Yale and, most importantly, inspired generations of students and leaders.

Through the years and quality of her service, Van has established herself as one of Yale’s leading volunteers and foremost international voices – one whose impact has been felt across the Yale universe. Her efforts date back to 1979, when she served as a Quarter Century Fund representative and became an Alumni Schools Committee interviewer. She has served as ASC director for Hong Kong since 2008, inviting admissions travelers into her home and regularly hosting students and their parents. For her great work as an interviewer and coordinator, she was recognized in 2014 with the inaugural ASC Alumni Excellence Award. Van’s service, however, extends far beyond the ASC. She has been a member of the Yale Club of Hong Kong since 1988, becoming an officer with the club in 1996 and serving as its president from 2002 to 2008. She served as a YAA delegate from 1997 to 2000 and on the YAA Board of Governors from 2013 to 2017, including a term as an executive officer. She also started a YaleWomen chapter in Hong Kong and is on the founding board of the Yale International Alliance. And for three decades she has been hosting musical and social events, as well as fireside chats with professors, authors, and artists. Throughout, she has been a mentor to students, applicants, parents, and alumni, and an ambassador for Yale at home and abroad, a gifted volunteer always willing to put in the time and effort and an inspiring leader to all who have had the good fortune to work with her.

No Yale graduate has played a more influential and enduring role in the growth, success, and popularity of the Yale University Art Gallery than Walsh, who has given his time to its governing board for more than 40 years. In the past 15 years, after his retirement as director of the J. Paul Getty Museum, Walsh served as chair of the governing board’s Education Committee, during a dramatic period of growth for the Gallery’s spaces, programs, and endowment. A fervent advocate for the unhurried examination of works of art in the original, Walsh has been a sought-after lecturer, speaker, and instructor. He has given seminars for the History of Art Department as a visiting professor and has participated in the intensive annual training of graduate students at the Gallery who, as Wurtele Gallery Teachers, lead classes for thousands of young people and adults annually. Over the past six years he has been presenting a public lecture series that not only attracts overflow audiences to the Gallery auditorium, but also is followed by tens of thousands via the Gallery’s website and YouTube channel. In addition, Walsh has served as chair of the University Council Committee for the School of Art and on the search committee for the director of the Gallery. Shining through his every endeavor is his dedication to Yale students, whom he serves as a mentor on campus, then long after they graduate. His commitment to the power of art and to the nurturing of aspiring scholars has benefitted students, the Gallery, and the Yale community immeasurably.

Williamson has selflessly and expertly stewarded Yale’s involvement in the Chicago area since the 1980s, establishing himself as one of the university’s most indispensable volunteers. His list of accomplishments is as long as it is impressive, starting with his work with the Alumni Schools Committee. He rose from an interviewer to the committee director, communicating frequently and effectively with his six area directors and 230-plus interviewers to ensure that the vast majority of Chicago-area applicants receive an evaluative interview, while personally interviewing hundreds of applicants, covering college fairs, and organizing bowling and pizza party yield events. His ASC quarterly reports are lauded by volunteers across the country, in turns informative and inspiring, thorough and understated – much like the man himself. Fondly referred to as the father figure of the Yale Chicago community, Williamson has served two stints as the Yale Club of Chicago president (1997-99, 2012-14), working with the club and local interest groups to grow the Yale presence in the Windy City. In addition, he has served regularly on the Class of 1980 Reunion Gift Committee; spearheaded Chicago’s participation in Yale Day of Service; and traveled abroad with the Yale Global Alumni Leadership Exchange and Yale Alumni Schools Ambassadors. From 2008 to 2015, he successively served as a YAA at-large delegate, a member of the YAA Board of Governors, and an executive officer. With his wife and two children also counting among the Yale alumni ranks, Williamson’s dedication to the university is truly a family affair – both immediate and extending to the Chicago community on which he has left an indelible mark. 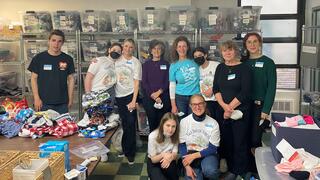 My Yale Day of Service story: Giving back and building hope at Nido de Esperanza